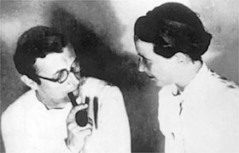 Sartre and de Beauvoir’s relationship lasted continuously for over fifty years from soon after they met in 1929 until Sartre’s death in 1980. But their relationship was a most unusual one. From the very beginning of the relationship, they agreed, at Sartre’s suggestion, that each would be free to take on other sexual partners as they pleased. But to avoid jealousy or the deceit characteristic of many bourgeois marriages, they would be totally honest with each other at all times about their other liaisons. As it turns out, they both took on many lovers and shared honestly with each other about their experiences. Sartre, in particular, seemed addicted to seduction, spending long periods pursuing his quarry, and keeping de Beauvoir informed of his progress. But de Beauvoir, too, had many lovers, a considerable number of them female.

Their lovers were often students, young actresses or courtesans, all plentiful in Paris in the 1920s and 1930s.

Both philosophers, by choosing this lifestyle, were being true to the existentialist philosophy they developed, which was based on exercising one’s personal freedom to create a life worth living. They also fulfilled what they believed was their duty to document this existentialist experiment, in the many novels, letters and memoirs they left behind.

Filed under Lovers of Philosophy, Philosophers

swims beneath the surface of ideas

author of 'If You're Happy'

observations of nature at large (and small), from Tasmania and beyond

book to the future

a new look at old books

Historians are Past Caring

Those who cannot remember the past are condemned to repeat it

Books and Writing | News and Resources

The Art and Craft of Blogging